WT: Thanks for doing this, Charles. Can you tell me, what and how it came to be that you found holes in the floor of the Arctic Strait?

Paull: The way we discovered these depressions, and more importantly, that the depressions were forming in recent times, goes back to the mapping vehicles that my institution runs. These are autonomous underwater vehicles we send down from the ship, that make really detailed maps of the seafloor, with superior resolution than you can get from a surface ship.

We have been mapping various features in the Beaufort Sea, on four expeditions with these vehicles.

In 2015 we decided to re-map an area we had surveyed earlier, with the hope that we could see small changes related to permafrost decomposition. We were shocked at the difference that the surveys showed up.

Since then, we have obtained multi-view data from four surveys of this area.

Just putting this in perspective for the changes, there are 40 places in a relatively small area that changed during a nine-year period. The largest depression that we found is large enough to consume a New York City block, a Manhattan block of six-story buildings. Very significant changes have occurred in a relatively short time. 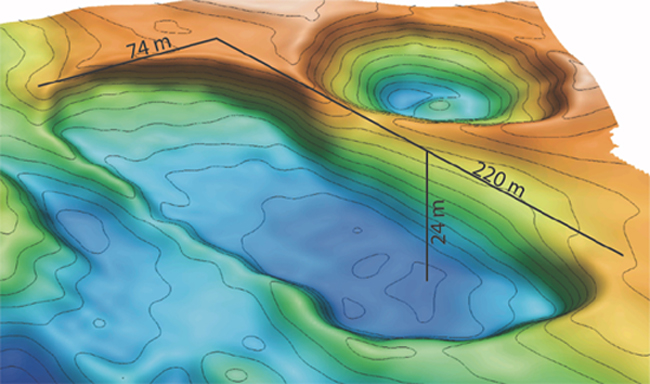 WT: What did you think when you saw this, what do you think caused this?

Paull: We didn’t realize this on the ship, it takes some time to process the data, to differentiate the two grids, to determine that what you are seeing is real. Once we started to see the data, post-cruise, we were simply shocked. The changes were much, much larger than we envisioned could be happening.

To put this in context, we were surveying an area with extremely rugged topography along the edge of the Beaufort Sea. This is an area that corresponds approximately with the edge of the permafrost zone associated with the last ice age. This is an area marked by the contrast between the sediments that have always been marine, and the sediments associated with some air exposure, into which permafrost formed during the last ice age.

At the end of the last ice age, when the sea level rose, it flooded the shelf with relatively warm Arctic ocean water, which changed the thermal structure of this area. The water at the shelf edge in the Canadian Beaufort Sea is still quite cold, the median temperature is approximately -1.4˚C, which is cold enough to preserve permafrost near the seafloor, but over time and as heat is released from the interior of the earth, the permafrost is slowly warming up. The consequence of this is permafrost at the bottom is melting, is releasing freshwater, and that freshwater is now slightly warm, is flowing underneath the remaining permafrost laterally. Where it emerges near the seafloor, it is carrying enough heat to melt the permafrost at depth. When you melt the permafrost you create void space, there is segregated ice, which results in collapses like sinkholes. This is a process that will unfold because of the slow progressive melting, thawing of the permafrost, followed by relatively rapid collapses. That is what we are observing here. 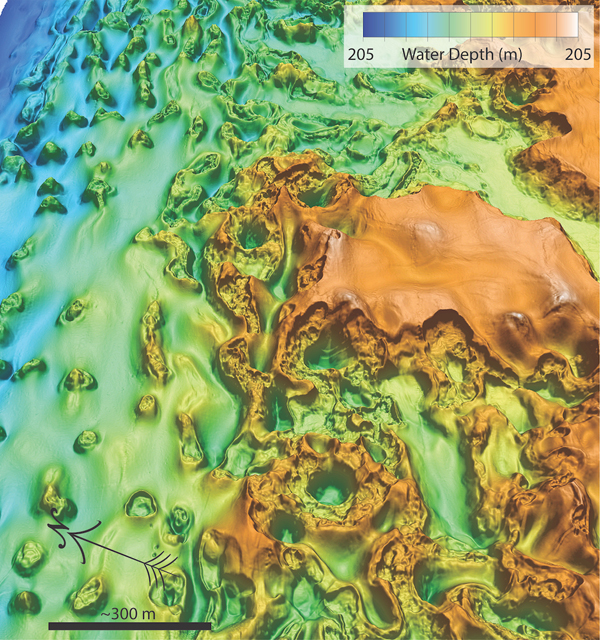 Image: 2022_Rough_Arctic_seafloor_terrain_Eve_Lundsten-1024.jpg Description: MBARI’s mapping autonomous underwater vehicles (AUVs) detailed the unusually rough seafloor terrain along the edge of the continental shelf in the Canadian Arctic. Sinkholes have developed where permafrost ice at depth has thawed, forming voids into which the seafloor collapsed. The circular mounds formed where the brackish water produced from the relict permafrost decay has migrated upwards and frozen, blistering the seafloor with ice-cored mounds called pingos. Credit: Eve Lundsten © 2022 MBARI

WT: You seem to know what’s causing this. Is this a problem for humanity, that this could get much worse, or do you think this is a relatively contained phenomenon?

Paull: We don’t know the answer to that question.

If you ask why this is of interest, there are two aspects.

The simple one is obviously, the rather rapid formation of holes on the seafloor of this size and scale would have a considerable impact on any seafloor infrastructure.

This is still a remote area, and historically there has not been a lot of access, but this is changing now with advanced summer melting. It tends to be ice-free in the summertime, there has been interest in oil and gas development in this area, this is an insight of geo-hazards, that clearly needs to be known before any infrastructure could be considered.

The other, the societal aspect of it, wherever there is permafrost, some methane is trapped. When it thaws, it is inevitable that methane will be released, that methane is free to migrate through the system, it will migrate into the water column and escape into the atmosphere. Thus, the thawing of submarine permafrost is an issue that has not been heavily considered in scientific discussions. We are obviously very concerned about permafrost thawing on land, where it is visible. This is the first time we have seen morphological changes on the seafloor, vividly, obvious changes. This is opening new discussions about what is going on offshore.

That said, the particular area where we see these big changes occur is probably not attributable to recent anthropogenic changes. It’s a bit of an unusual area because it is still bathed by this remarkably cold water, which is preserving the near seafloor permafrost from thawing. The fresh or brackish water coming out is re-freezing under the current conditions, but the whole sediment stack is warming and permafrost is melting at depth. This is showing us what is going on now and will continue to go on for periods of time under the shelf.

There are areas under the shelf, particularly in shallower water where the seafloor temperature is warming. In these areas, which have been poorly surveyed, we should be looking for similar features which could be developing these features in much shorter time scales.

WT: This is why we got you on the phone right away, as soon as we saw the maps, we see this is not like the other. Is this the same phenomenon I have seen where we get the instant hills in the northern landscape, where apparently the methane burps and we get a new hill?

Paul: It will be a discussion for a long time as to what the similarities are. We have no evidence that these particular features (sinkholes) came about from explosive eruptions as have been inferred in Siberia. We cannot accommodate where the sediment has gone, it appears to have collapsed inward. We see that the area we are surveying is not just one recent, isolated hole by itself. There are many, many features like this that form in a band about 95 km long. It’s hard to envision how you get enough gas stored in pockets to produce this whole landscape. We also see it’s not just new holes forming, we see scarps retreating. Remarkable similarities to the way thaw scarps retreat off Arctic shorelines elsewhere in higher latitudes. Pretty clearly, ice lenses that get exposed, are thawing, retreat laterally, and we infer different mechanisms to explain these features.

We also know there is water coming out through this system, which means there is permeability in these structures, which isn’t the environment that you would expect to accumulate large amounts of gas in. There is clearly gas coming out along the Arctic shelf edge and on the shelf in many places, it’s all part of the same story.

WT: This is just a surreal discovery. In the past, you have been in the same end of the world mapping the continental shelf, is this accurate, that you have been doing work with the Canadian government on the ledge?

Paull: Yes, I am part of an international consortium, that involves representatives from Geological Survey Canada, Fisheries and Oceanography in Canada, the Canadian Coast Guard, National Research Council of Canada, and the Korean Polar Research Institute, KOPRI, South Korea. This group of three nations has been working in this area, I started in 2003, the Geological Survey Canada came onboard in 2010, and by 2012 the Koreans had joined us, and we are going back in September this year.

I need to point out we have had considerable contact with the local populations, Indigenous people, they are rather interested to protect the seafloor in this area. We need to provide information on the processes, not only what is happening on the land, but also in the ocean, this is of great importance to the locals.

WT: I am amazed that these holes opened in such a short time. Does this mean bad things? Right now, we have a pretty good idea about how much methane we can expect to be released in the atmosphere due to climate change, does this finding of huge holes in the seafloor change the going calculations?

Paull: It’s a very relevant question. Again, when we discovered the holes were there, we quickly pulled together all the information about what we know about the changes in thermal conditions during recent time periods. There are a few studies looking at long-term changes in temperature conducted in the 1980s and 90s, maybe going back to the 70s, these were conducted by Humphrey Melling. We have been collecting data, whenever we go into this area, we have a thermal structure for the bottom layers. There is no substantial evidence that the bottom water temperatures, sitting on the seafloor in this area have changed during the anthropogenic period, or at least during the last multiple decades.

So, I don’t think we can attribute these changes to recent accelerated climate changes. Clear, there are changes that have been accelerated in recent times, and probably in shallower water, there are, similar processes that may be getting accelerated. Going back to the question, do we know that this has changed the local flux of methane coming out of the seafloor? But we have no evidence that this has actually happened. There may have been methane fluxing out slowly for long periods of time in this area.

WT: This UN submission for the ledge, whereby the circumpolar countries are supposed to be mapping the arctic ledges for the UN, would the Canadian government be using you to do this kind of study, is it accurate to say that you have something to do with this submission?

Paull: I think it is very important that the Canadian government collect regional maps that outline what’s out there. This has been going on, in part, by the research group I am associated with. My institution’s particular role in this is to use the data that has been collected more regionally, then to do very topical and surgical scientific studies of the places of interest that are there.

I have been using the regional data as it comes in, to do topical studies. When I started studying features in the Arctic, I was interested in gas decomposition under the shelves, in 2003, there weren’t maps that would tell us very much about where to go. It was not until 2009 and 2010 that the first systematic surveys of modest areas of the shelf edge and slope in the Canadian Beaufort Sea were undertaken.

These have allowed the type of topical studies that we do. My institution is mapping, my colleagues' work is to try to understand the processes that occur on the seafloor at these sites.

It is critical that all parties collect data on conditions, making maps in the Arctic before it changes further, so we can track the changes attributed to recent warming, which is so vividly obvious along the shoreline of the Arctic.

WT: We will stay in touch to see how this progresses.