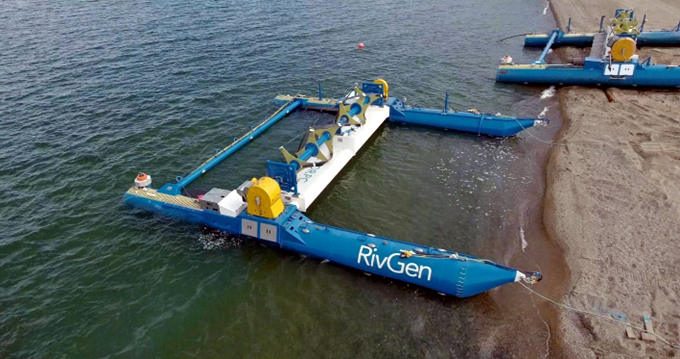 ORPC’s advanced RivGen Power System harnesses energy from free-flowing rivers and tidal currents without dams or impoundments. After proving itself over three winters in real world, harsh Alaska conditions, the Igiugig-RivGen Project is the longest operating hydrokinetic project in North and South America.

“ORPC’s RivGen System has shown outstanding safety and reliability over the past three years in Alaska. We look forward to monitoring, testing and validating the system for the Canadian market at the CHTTC,” Bibeau said.

“Many First Nations communities are located near water resources such as a river. If the river has enough kinetic energy it is possible to supplement or even eliminate diesel dependence in remote communities. Hydrokinetic is cheaper than diesel and is a renewable resource with a low carbon footprint.” Deployment is expected in September of 2022.

“This is a milestone for ORPC Canada,” Joly told WT. “What we are most excited about is that the site will become a learning and training centre to bring awareness to remote First Nations communities.”

Joly adds that the system is basically the same as the one in successful operation in Alaska. “We are expecting there will be a few tweaks in the mooring once the unit is submerged and we test the soil. But we know for sure it will operate in the harsh Canadian winter climate.”

An added feature that will be attractive to remote communities is that the Riv-Gen is easily transported to its final destination in three pieces that are easily assembled.

“We are anxious to demonstrate to Chiefs and Counsels across Canada the possibilities that hydrokinetic energy can bring to the restoration of northern communities.”