brought to you in part by

Caterpillars alter nutrient cycling between land and nearby lakes 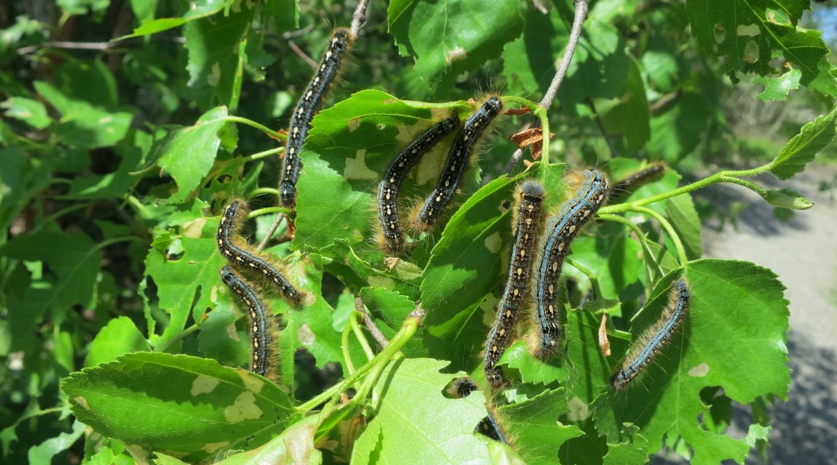 A research paper recently published in the scientific journal, Nature Communications, believed to be one of the most extensive studies on the topic, highlights an ongoing 32-year monitoring study conducted by the Center for Vale Lakes Vitality at Laurentian University and the University of Cambridge. Shown here are tent caterpillars attacking trees beside the research center in Sudbury. Image courtesy John Gunn, Canada Research Chair in Stressed Aquatic Systems; Director, Vale Living with Lakes Centre, Laurentian University

The study focused on 12 lakes across the Algoma, greater Sudbury, Muskoka, Temiskaming regions of Ontario, Canada, that have been continually monitored for 32 years.

“My research centers around the effect of disturbances and the interconnectivity of ecosystems and understanding how natural and anthropogenic disturbance events alter the broader landscape and how these impacts interact with climate change.”

Woodman, a PhD student in the Ecosystem and Global Change Group at the University of Cambridge, collaborated with Laurentian University’s Living with Lakes Centre to study caterpillars in the region.

Climate change is predicted to increase the area in Canada where outbreaks can occur. For example, Woodman says that under drought conditions trees are stressed and do not produce the defense compounds, the tannins, in their leaves which make the leaves unpalatable to insects.

In 2020, Ontario recorded 585,000 hectares of forest – an area roughly the size of Prince Edward Island – denuded of foliage by the voracious appetite of caterpillars.

One caterpillar can eat through a square metre of leaves. As it eats, it excretes.

Millions of caterpillars consuming leaves over the months of May and June can quickly defoliate a forest while excreting small particles on the forest floor.

“The frass, as the excrement is called, is highly dissolvable. So, after heavy rain, it makes its way to the forest floor and nearby waterways,” Woodman tells us.

The research has found the resulting decrease in leaf-fall and increase in caterpillar droppings hugely alter the way nutrients, particularly carbon and nitrogen, cycle between land and nearby lakes.

The nitrogen-rich frass can wash into the lake water and act as fertilizer for microbes which then release carbon dioxide into the atmosphere.

In years with insect outbreaks, the large quantities of frass may favour the growth of bacteria that release greenhouse gases in lakes, overpowering the large algae that remove carbon dioxide from the atmosphere.

Let There Be Light

Woodman adds that in a normal year with little to no climate disturbance, leaves will fall into lakes, streams and the forest floor which allows for the leaching of nutrients - “just like making a cup of tea, when rain hits the forest floor there’s a massive release of leaves into the water creating a browning. This browning which does in fact look very much like tea is due to a build-up of dissolved organic carbon in lake water.”

Under those conditions, the lakes become darker. Light cannot penetrate the water’s depths.

“Our 32-year-long monitoring study showed that an outbreak of leaf-munching caterpillars can effectively offset an entire year’s worth of carbon accumulation in nearby lakes, significantly improving water quality.”

The study found that in outbreak years, nearby freshwater lakes had one-third less dissolved carbon or “forest tea” in the water because the caterpillars effectively held back the flow of carbon to the lake.

Forty years ago, Sudbury was a blackened landscape that had been devasted by pollution from mining sites and industrialization.

Trees in the industrial barrens of Sudbury suffered from loss of moisture and organic matter and decades of accumulated toxic metal particles from smelters.

Woodman credits the Vale Living with Lakes Centre together with the Ontario Natural Resources and Forestry and the Canadian Forest Service for their hallmark work.

“It has been most fascinating to discover the reclamation of this landscape,” Woodman says. “It has been an honour to work with the data set that is truly world-class – most universities have one or two years in the field, whereas Laurentian has over 32 years of incomparable work that is an example to the world.”

Building on the foundation of previous researchers, Woodman found his own eureka moment.

When invasive caterpillars encounter already stressed trees surrounding the 80,000-hectare industrial area, the trees, disadvantaged by the legacy of soil loss, contamination and degradation, succumb in battle with defoliating insects.

However, in an unexpected outcome, Woodman explains that the stressed trees produced leaves with fewer tannins making them more attractive for caterpillar consumption.

“Healthy soil is one of the largest and safest places to sequester carbon from the atmosphere, key in our fight against climate change.”

The discovery has elevated the caterpillar to Nature’s engineer in its surprising role in altering key features of the global carbon cycle.

As Woodman is planning his return to Cambridge University, he leaves WT with his vision of continued research.

“I hope my research can help us tackle climate change, and further our understanding of water and this beautiful complex world. The more we understand our ecosystems the better equipped we will be to conquer our past actions.”